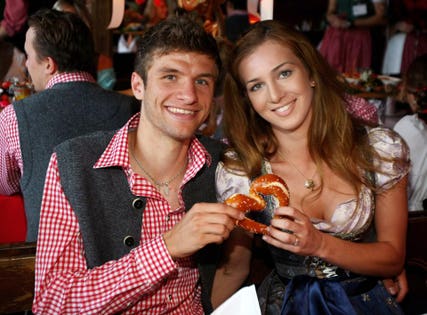 If you use Google to search the Internet today, you will find something knot. Or rather knotted. The Google Doodle consists of the following video tribute to pretzels:

Why pretzels? Well, September 21 is the beginning of Oktoberfest, the Bavarian German celebration that includes beer, as well as beer. Oh, and there is also beer. Did I mention that beer along with some beer plays a role? Ah, but beer is not the only thing that constitutes the 16-to-18-day folk festival. Pretzels play a big part in this celebration too.

Of course, eating healthy may not be foremost on the minds of many Oktoberfest goers. Beer isn’t usually considered a health food. If anyone suggests a beer-only diet, don’t do it. Undoubtedly, you’ve heard the warnings about beer such as the alcohol and the calories. But what about pretzels? Should you get bent out of shape about eating too many of them?

Well, this video shows how pretzels are made to give you a sense of what’s in them:

At first glance, they don’t seem too unhealthy. They tend to be relatively low in fat. They are baked and don’t have the saturated fat that many fried foods have. Baked is usually better than deep fried, although when it comes to smoking marijuana they sort of mean the same thing. Pretzels also contain moderate amounts of nutrients such as thiamine, riboflavin, and niacin. There is some fiber, but not much. If you are constipated, slamming down pretzels is probably not going to get things going.

Ah, but here’s what may make you salty if you are trying eat healthy. Pretzels can have lots of salt. Several servings can easily put you above your recommended daily limit of sodium. Then there are the carbs. Pretzels are basically completely refined carbohydrates with salt added and without much protein.

On top of that, or on top of the pretzels, are the dipping sauces or coating. Unless you are covering your pretzels with kale, such additions can add even more salt, sugar, and calories to what you are putting in your mouth.

Therefore, in reality, pretzels are not healthy by any stretch of the imagination. Certainly, they aren’t as bad to eat as say deep-fried Twinkies or lard soup. Nevertheless, treat pretzels as a treat and eat them only in moderation. There are things that you can do to make pretzels somewhat less unhealthy such as choosing low sodium and whole wheat pretzels, scratching the salt off of them before putting them in your mouth, and using healthier dipping sauces and toppings. Pay attention to how many pretzels you are eating because you could get caught in the beer-pretzel-beer-pretzel-beer cycle. Sometimes a taste of a pretzel is all that you knead or need.

Alila Villas Koh Russey, a private island resort in Cambodia – full tour
Five fabulous hotels for the best all-inclusive holidays in Majorca
The best hotels for all-inclusive holidays in the Caribbean, including private island resorts and treehouses
New Mexico Motorcycle Road Trip | Santa Fe to Taos Pueblo
Thumbs down: Does coronavirus mean hitchhiking has reached the end of the road?