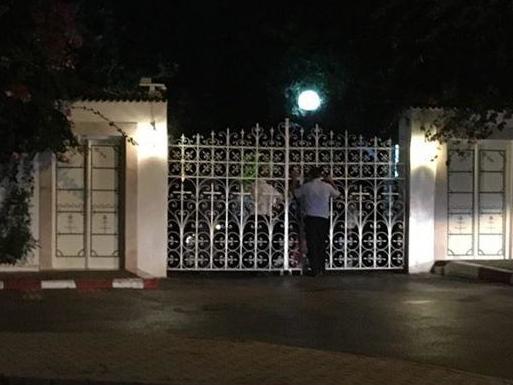 Staff at Les Orangers Hotel in the resort of Hammamet were reported to have demanded payment of sums equivalent to as much as £2,500 before they were allowed to leave for the local airport, Enfidha.

One guest, David Astbury, told The Independent via Facebook: “Tonight we have learned that because of the difficulties and possible bankruptcy of Thomas Cook, guests are finding themselves faced with bills for their accommodation.

“Guests who should depart tonight on flights home are not being allowed to leave until they pay again, having previously paid in Britain, and are told that they can reclaim from Atol [the government holiday protection scheme].

“Transfer buses are not being allowed through the gates. Guests who are refusing or cannot pay again for their holidays are being held as hostages.”

A flight was due out from Enfidha to Manchester at 11.50pm. Additional departures on Thomas Cook Airlines to Glasgow and Newcastle are scheduled for Sunday morning, with another Manchester flight at 10pm.

Another guest, Lisa Triggs, wrote: “Les Orangers hotel have locked the gates so no one can get in or out and are giving everyone leaving today or tomorrow invoices.

“They want the bills paid before anyone can leave.”

One report said that the hotel WiFi had been turned off.

The Independent understands that Thomas Cook representatives are on their way to the hotel. The British Consulate in Tunis and the Tunisian Ministry of Tourism are also aware.

Thomas Cook continues to trade normally and there is no legal basis to ask guests to pay again.

Were the company to fail, the Civil Aviation Authority – which administers the Atol scheme – would inform hoteliers that it will settle the bills.

The Independent has tried to contact the hotel repeatedly by email and telephone.

Thomas Cook led the way, in February 2018, in re-establishing a holiday programme to the North African country.

Which international destinations are reopening to tourists?
Five fabulous hotels for the best all-inclusive holidays in Majorca
How Delta, United and American make money from airline loyalty programs
The best all-inclusive Gran Canaria hotels for a blissful holiday without limits
Why ‘immunity passports’ won’t be the golden tickets to travel after all