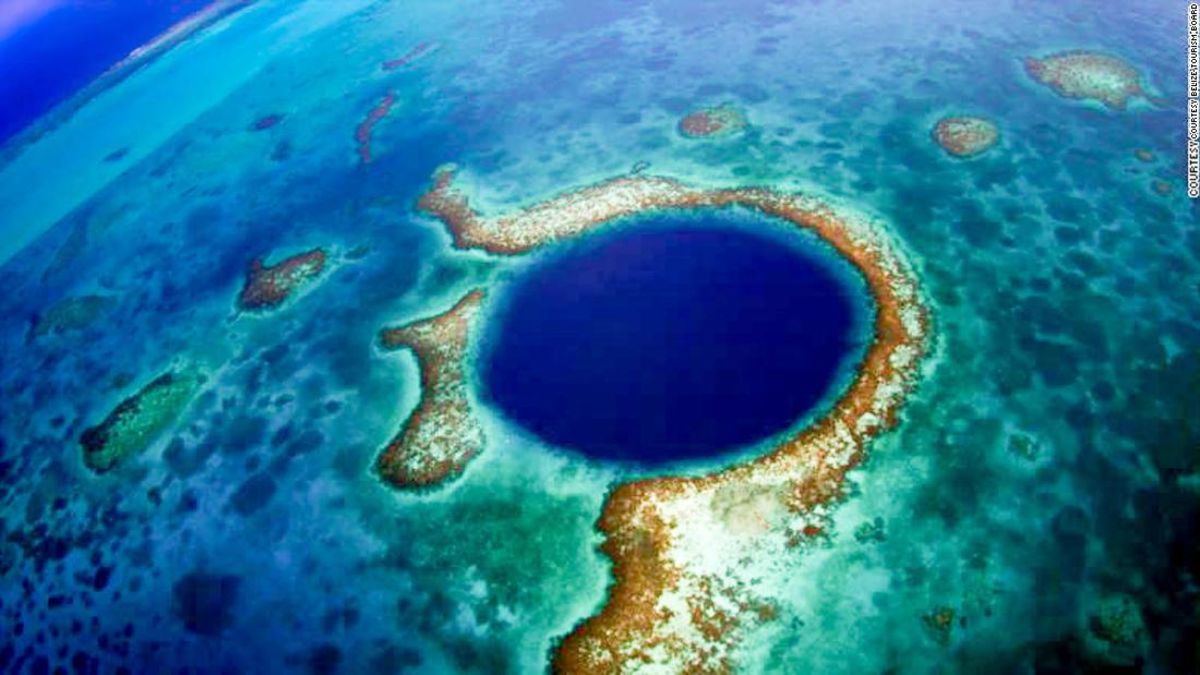 The Great Blue Hole is the world’s largest sinkhole, measuring an incredible 300 meters (984 feet) across and roughly 125 meters (410 feet) deep.

The team also included Fabien Cousteau, grandson of underwater explorer Jacques Cousteau — who put the Blue Hole on the map back in 1971. The group embarked on their odyssey in December 2018, determined to discover the secrets at the bottom of the Blue Hole.

Using two submarines, the expedition captured new images and footage inside the Blue Hole and created the first 3D map of its interior.

Dispatches from the deep

Bergman says one of the most exciting findings was never-before-seen stalactites — a type of mineral formations shaped like icicles — roughly 407 feet into the hole, very near the bottom.

Bergman says the whole experience of being submerged in the murky depths was pretty incredible.

“One of the crazy things about the hole is the hydrogen sulfide layer,” says Bergman.

The layer descends at roughly 300 feet, cutting out all the light and plunging divers into darkness.

“You lose all of that Caribbean sunlight and it just turns completely black, and it’s totally anoxic down there with absolutely no life,” explains Bergman.

But thanks to their high-resolution sonar, Bergman and her team were able to see the hole’s intricate features.

“You can be 20 or 30 meters away from a stalactite or a hunk of the wall and see it in every perfect detail, better than eyesight could even provide,” she says.

Intriguingly, not everything the team found could be identified. They found some unidentifiable tracks at the bottom of the hole — Bergman says these remain “open to interpretation.”

The Stingray 500 Submarine on the edge of Lighthouse Reef

The team was also really pleased to see that the Blue Hole was pretty free from trash.

“There were basically two or three little pieces of plastic — and other than that, it was really, really clear,” says Bergman, spotlighting the work of the Belize Audubon Society, which helps protect the hole.

Live from the ocean

The dive was broadcast on the Discovery Channel.

The original aim was to broadcast live from the bottom of the hole. This proved tricky, but the team still found a way to bring the experience into people’s homes.

“We dove the morning before the livestream, and then livestreamed from the ship being very open and clear about the footage having been filmed a few hours before,” says Bergman.

Bergman and the rest of the team are keen to find other innovative ways of transporting images from the ocean onto personal handheld devices.

She namechecks the International Space Station, and the way astronauts live-message from the sky, bringing people there with them.

“Drawing people into that — the way people are fascinated with astronauts — giving them a chance to relate that to deep ocean exploration, I think that’s done through the live interaction,” says Bergman.

The team hopes to embark on other exciting dives later in the year.

Following the dive on December 2, vessels monitored the site for two weeks to get all the data to make the 360 degree sonar map.

“We didn’t leave any equipment. We take only pictures, leave only footprints,” says Bergman.

The team is now planning an upcoming expedition to the waters of the British Virgin Islands. They’re not planning to live broadcast it, but they’re hoping to get equally exciting footage and findings.