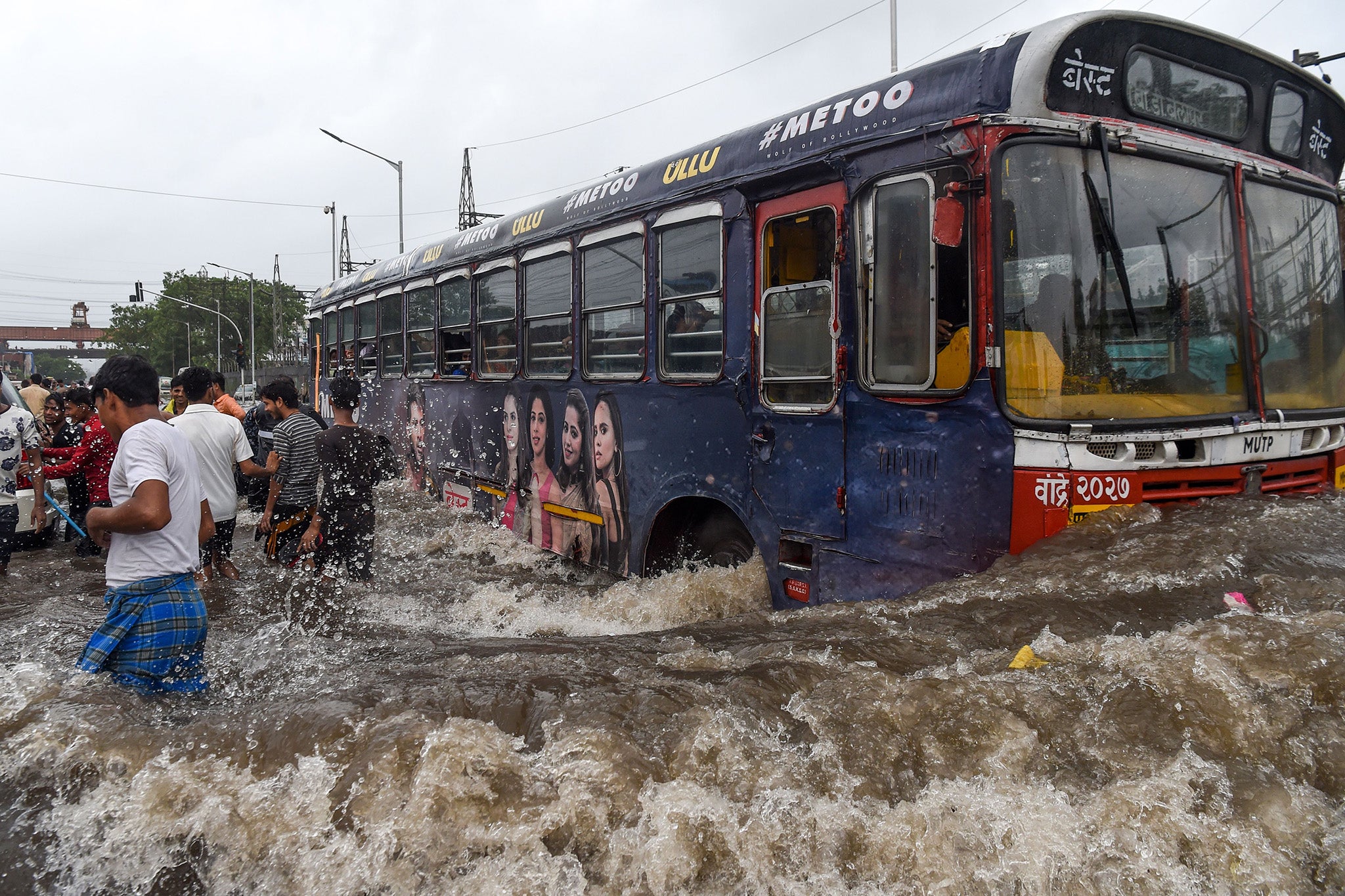 This year’s monsoon in Mumbai saw the highest rainfall in history, breaking the previous record of 3,452mm in 1954.

Plastic waste has been choking the centuries-old drainage systems around the city before tumbling, during high tides, into the Mithi river and causing widespread damage to roads. Yet, litter is still dumped on the streets, leaving residents to navigate water-filled potholes and emergency services to rescue people trapped in their flooded homes or stranded – there have been over 30 declared fatalities so far.

Critics of a nationwide ban cite a law passed in March 2018, by the state government of Maharashtra – of which Mumbai, with its population of 22.5 million, is the capital – that banned the sale, use and distribution of plastic bags, polystyrene, single-use plastic cutlery and pouches, PET bottles with a liquid capacity smaller than half a litre and non-woven polypropylene bags.

Over 18 months later, there are cries that Mumbai is no closer to success – with a large number of its businesses blaming a lack of alternatives, disruption to supply chains and rising production costs – leading many to question whether the government’s environmental efforts are anything more than a PR exercise. However, despite a lack of support from above, grassroots organisations in the city are building momentum and leading the way in the promotion of sustainable practices – a lesson for the rest of the country that, under no uncertain terms, change is possible.

Following a call-to-action made during his annual Independence Day address on 15 August, Modi was widely expected to ban single-use plastic by 2 October, the 150th anniversary of Gandhi’s birth. However, after loud resistance from the country’s plastic corporations – which employ nearly 4 million people across 30,000 processing units – an “awareness campaign” was announced in place of a blanket ban.

The much-hyped “Clean India” mission – which, in line with Gandhi’s vision for the country, requires all businesses and individuals to dedicate 100 hours per year to India’s sanitisation as of October 2014 – tweeted “it is not about banning single-use plastic but creating awareness and a people’s movement to curb its use”. The news also comes after figures, released in June 2019 by the National Sample Survey Office, showed an overall unemployment rate of 6.1 per cent; the highest in 45 years.

In March 2018, the Maharashtrian government issued a three-month warning before putting its ban on single-use plastic in place throughout the state, applicable to businesses and consumers alike. The Brihanmumbai Municipal Corporation (BMC) deployed around 300 blue-uniformed guards to carry out spot checks on businesses and slap fines on business owners for failing to comply with the law – anywhere from 5,000 rupees (£55) for a first-time offence, to 25,000 INR (£274), plus a three-month prison sentence as a maximum penalty.

A year later, just half of the BMC patrol are said to remain on active duty. Civic efforts are running out of steam, due, in part, to a lack of space for collected waste and a perceived disinterest in recycling contracts. When questioned, corporations lobby against such regulations and blame a lack of hygienic alternatives offered – particularly those that would cover the cost of liability for transmitting foodborne illnesses – feeling ill-equipped to fully relinquish the use of single-use plastic in their day-to-day operations.

But the issue runs deeper: according to a report by the British Plastics Federation, the growth rate of the Indian plastics industry is one of the highest in the world – growing at 16 per cent per annum, compared to 10 per cent in China. Despite India’s population of 1.37 billion (versus China’s 1.39 billion), its plastics industry regularly reports shortages in labour, thus it invests heavily in Indian technology, such as automation and conveyor belt systems.

With Mumbai now a hotbed for “ecopreneurs”, single-use plastic alternatives – such as Beco, a technology startup selling biodegradable alternatives to kitchen-based plastic packaging, which has already been able to prevent over 130 tons of waste since the company’s inception in March – are indeed available, but lack corporate and governmental support persists.

A growing shift in consciousness is being led by local students and environmentalists, heralding the rise of grassroots schemes that challenge antiquated social conventions, such as caste-focused hierarchies, and tackle the bureaucracy that’s hindering much-needed environmental change. Many of these grassroots groups focus on collecting plastic waste throughout the city, leading the charge in transforming each of Mumbai’s districts and eco-systems.

One example is Mumbai’s “Beach Warriors”, a group which mobilises to collect plastic waste each weekend and, having succeeded in bringing locals together to transform its plastic-ridden beaches, has recently dispatched a team to the ghats (riverside steps) in Kolkata. The non-profit organisation “Project Mumbai” – led by lawyer and environmentalist Afroz Shah – mobilised nearly 5,000 Mumbaikars to clean up almost 20 tons of litter from nine beachfronts, four rivers and various mangroves, a feat which was later recognised by the United Nations as the “world’s largest beach cleanup project”. Shah has since been praised for a second accomplishment: successfully unifying people of all castes and religions – everyone from residents of the Dharavi slums to Bollywood actors – to engage with a cause that impacts all Indians, regardless of their background or circumstance.

Elsewhere, the sustainability movement is changing how the fashion industry works. In India, the industry will be worth $59.3bn by 2022 – comparable to the UK’s $65bn – making it the sixth-largest in the world. Mumbai’s up-and-coming designers are determined to make sustainability fashionable, and to teach consumers about the supply chain, highlighting India’s longstanding history of craftsmanship to a younger, more socially-conscious audience, who are increasingly inclined to reject the waste being created by “fast fashion” outlets.

There’s Toile, an eco-friendly boutique in the city’s Khar West district, run by Farheen Rahman and Priti Jain, which is known for donating to charity with every purchase and for championing home-grown eco-labels. Doodlage, an entirely zero-waste brand, donates excess fabrics to various NGOs, such as the welfare-focused Samarpan Foundation, to create reusable sanitary products for women in rural areas.

Also changing is Mumbai’s hospitality industry. The global market has woken up to the fact that its guests want their experience to be environmentally friendly – with the world’s largest hotel operator, Marriott International, announcing that it is to ban plastic amenities in its properties by the end of 2020. A study by tourism operator Cox and Kings India, which surveyed 5,000 millennials (aged 20-35) in key cities found that 89 per cent would choose a hotel based on its sustainable practices. Furthermore, 92 per cent of those surveyed also showed an interest in “altruistic travel”: cause-based trips, NGO visits, sustainable treks, hikes and rural tours.

Erin Zaikis is founder of the India-centric NGO Sundara Fund, which recycles used hotel soap – melting down the product and sanitising it to create new bars. Sundara currently hires almost 40 local women full-time. She pays them a fair living wage and empowers them to conduct free hygiene classes for other vulnerable communities and distribute what they have made. Zaikis attributes the challenges the Indian hospitality industry faces to an almost insurmountable level of bureaucracy.

“When Sundara gets soap from a partner, we’re asked to sign a liability contract and take out insurance, so if it ever came down to it, we’d be the ones being sued,” she says. “One of the first things we are asked is, ‘Who do you work with already? What’s in this for us?’, which just makes you understand that this is an ingrained mindset and a lot of businesses are reluctant to be the ones seen to be leading change.”

One of the hotels which have been fearless about exacting change, however, is boutique hotel Abode Bombay – one of Sundara’s first partners in India – which signed up to the project without hesitation. Co-founder Abedin Sham created a concept of “nothing new, everything local”, which extends to everything in the hotel, from carefully repurposed furniture to fabrics and artworks sourced from Mumbai’s vintage markets.

The homely property, located in downtown Mumbai, is passionate about social enterprise. It works with a female-owned and operated taxi company, which helps survivors of child marriage, alcohol abuse and domestic violence into employment, and, in a rare move for the hierarchical Indian hospitality industry, places its staff firmly on the same social strata as their guests by putting them on first-name terms. It has also completely eschewed single-use plastic which, with shabby chic chandeliers and sari-covered cushions, would look equally at home in Shoreditch. In line with the “Clean India” policy, Abode Bombay and other hotels in the area each conduct cleanup initiatives around Colaba, Mumbai’s main tourist district.

“By making people lead change in each region, others will follow, and sometimes we find that our guests want to join us and help,” says Sham. “We end up collecting around three tons of dry litter per outing, with the help of our guests, friends and family.” The growing wave of environmental consciousness is filtering up to the country’s titans of hospitality. The five-star IHCL Group – which operates the landmark Taj Mahal Palace in downtown Mumbai – pledged to minimise its carbon footprint by maximising renewable energy and, at key properties, has invested in bottling plants in order to phase out PET bottles, which are still being manufactured at an alarming rate across India. The group recently opened beach resort Taj Exotica Resort and Spa in the Andaman and Nicobar Islands, off the east coast of the country, which is entirely free of single-use plastic.

The tide has changed with India’s younger generation, who recognise environmental apathy as an impending threat to their health, business and biodiversity, but can also readily identify the need for a collective Indian identity in order to impact change on a macro level – and change appears to becoming, as a result of their sustained efforts. Leading conglomerate GVK, which owns some of the country’s biggest energy, hospitality and transportation businesses, has announced that as of 2 October Chhatrapati Shivaji Maharaj International Airport is now 100 per cent free of any single-use plastic, with all food and drink and retail outlets having tackled any residual use.

Particularly with the current absence of rigid national law, which perhaps suggests the government’s growing recognition of the gulf between corporate and consumer interest, the time is ripe for Indians to collectively create room for global innovation in the fight against plastic pollution. Entrepreneurs need only to look to the new generation in Mumbai to see that environmental polluters will increasingly find their businesses under threat if they don’t clean up their act.

‘Holiday from hell’: Guests trapped inside coronavirus hotel in Tenerife
Top 10 Places To Retire Overseas
Dubai hotels: 10 of the best places to stay
What are the new alcohol restrictions for holidaymakers to Mallorca and Ibiza?
Perfect Day in Paradise | Exploring the Bahamas