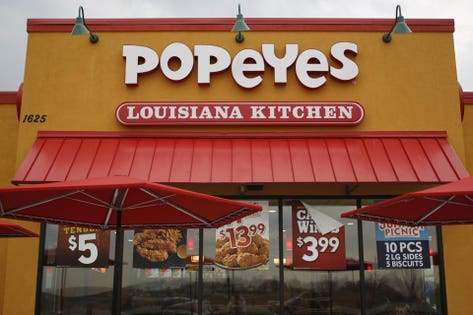 Nearly a week after Popeyes’ fried chicken sandwich made its return to the fast food scene, it still seems to be generating buzz.

People are tweeting photos of long lines at Popeyes across the country, as well as their impressions of the sandwich, now that they can get one. (Although Justin Bieber did not seem impressed.)

Placer.ai, a company that tracks retail foot traffic and other data, said Thursday that the reaction to the sandwich’s return exceeded that of its first time out.

It estimated that Sunday traffic at Popeyes outlets was up 300 percent over the normal baseline, compared with increases of 255.6 percent and 243 percent on the original launch days of Aug. 23 and Aug. 24, respectively.

Why is a chicken sandwich causing so much fuss? It’s simple. Chicken is one of the fastest-growing, and most sustainable features of fast food menus.

That’s created a Big Four of chicken players, in a market that still has space to grow.

In 2010, there were 17,924 fast food establishments that specialized in chicken, according to a comprehensive report produced in July by analyst Anna Amir at IBIS World.

That revenue growth has been steady, growing about 8.4 percent per year during the past five years, and annual growth of 4.7 percent expected through 2024, according to IBISWorld.

Within the fast food chicken field, Chick-fil-A is the clear leader, but its competitors are racing to keep up. Here’s a look at each company, and their chicken sandwich.

Chick-fil-A: With 27.9 percent of the market, Chick-fil-A is the company that every fast food chicken player watches. Chick-fil-A is privately held, but IBISWorld estimates that its annual revenue in 2019 will be about $9.6 billion, which is up 11.3 percent over the past five years.

Chick-fil-A’s menu lists six different chicken sandwiches, but its flagship is the Chick-fil-A Chicken Sandwich. It sells for $3.39, and features a boneless chicken breast, cooked in peanut oil, served on a buttered bun with pickle chips.

It’s available on a gluten free bun or a multi-grain one for an additional cost.

KFC: It hasn’t been the easiest decade for KFC, part of Yum Brands. Once the dominant name in American fast food fried chicken, KFC’s market share has dropped from 22.6 percent in 2014 to 14.6 in 2019, according to IBISWorld.

Its revenue is forecast to be about $5 billion in 2019, and IBISWorld believes KFC will hang onto its market share, despite growing chicken competition.

KFC has two basic fried chicken sandwiches, the Crispy Colonel Sandwich, which costs $4.59, and Chicken Littles, which are mini sandwiches available for $1.69. It also offers sandwiches in limited time flavors, such as its current lineup of Smoky Mountain BBQ, Georgis Gold and Nashville Hot.

Popeyes: Before the fried chicken wars broke out last summer, Popeyes was expected to hold about 10.8 percent of the fast food chicken market in 2019.

Its revenue has grown from about $2.3 billion in 2013 to $3;7 billion in 2019. And, Popeyes’ owner, Restaurant Brands International, has the company on an aggressive growth path.

The Popeyes Fried Chicken Sandwich, available in regular and spicy, costs $3.99. It is dressed with mayo and pickles.

Zaxby’s: Another privately held company, Zaxby’s is mainly available across the Southeast. But it holds 8.1 percent of the chicken market, and is expanding beyond its home region.

Zaxby’s has a wide variety of chicken sandwiches, so it’s hard to tell which can be considered the centerpiece of its menu.

One flagship can be considered the Chicken Finger Sandwich, which has Zaxby’s signature chicken fingers, its famous Zax sauce, lettuce and tomato on a potato flour bun.

On its blog, Pacer.ai says there are two things that have yet to be determined in the fried chicken sandwich wars: can the interest be sustained, even at a lower level?

And second, how will the competition respond to Popeyes? Given the number of choices out there, it may not feel a need to do so.

According to Pacer.ai, KFC is already enjoying a bump in business from Popeyes’ publicity.

Hotel Grande Bretagne, a Luxury Collection Hotel (Athens, Greece): a review
Four travel stories that were too good to be true
Isle Of Capri Italy During Off-Peak Season
Five fabulous hotels for the best all-inclusive holidays in Majorca
My Bali, Indonesia Luxury Travel Staying in “One Of The Worlds Most Beautiful Homes” | Sorelle Amore