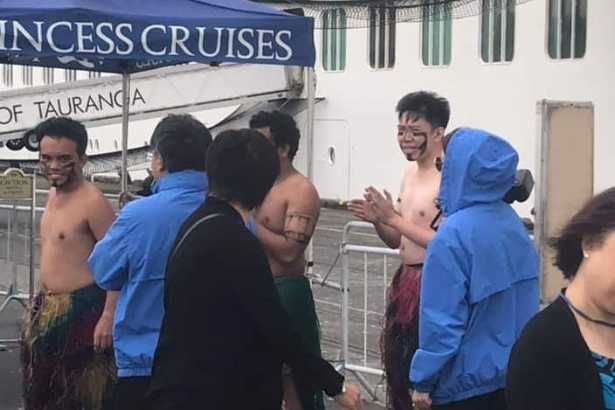 A cruise company has apologised for a “culturally insensitive” performance in which the ship’s staff dressed up as Maori and danced for guests.

The Princess Cruises liner had docked at New Zealand’s Port of Tauranga when guests were welcomed onboard by people dressed in grass skirts with black markings on their faces.

Video shows the ship’s photographer was there to take pictures of passengers with the “Maori” as they arrived.

A Facebook user called Steve the Maori shared pictures of the spectacle, calling it “a disgrace”.

He pointed out that many cruise lines employ local Maori cultural groups to sing or perform dances to welcome travellers ashore, but that in this case “Princess Cruises are using their own non NZ staff, with careless scribbles on their faces wearing skirts which do not depict Maori culture which I personally find a disgrace”.

“This practice needs to be discouraged.”

Princess Cruises says it “apologises unreservedly” for the incident.

A spokesperson said: “We took immediate steps to address this sensitive situation. After being made aware of the situation, the ship’s management team took action to withdraw the crew members from the area to prevent any further possibility of cultural insensitivity.

“We give a complete assurance that no offence was ever intended and we apologise unreservedly for what has happened.”

It comes after Air New Zealand’s social team was praised for responding to a “racist” customer by using Maori language.

In a Facebook post which has since been removed, Air New Zealand wrote the following reply to someone enquiring about when the Koru Club lounge would be reopening at Wellington Airport: “Kia ora, our team are working hard to finish our amazing lounge for customers. We hope to have more information regarding this shortly.”

“Kia ora” is the equivalent of “hello” in Te Reo, or Maori, one of New Zealand’s two official languages.

The customer responded “I’m not Maori”, before asking, “Any likelihood it will be open by mid-December?”

Rather than holding back, Air New Zealand responded completely courteously – but with even more Maori language.

“We do not expect this lounge to be re-opened within 2019. However, taihoa koe ka kite all the amazing improvements we have made,” they wrote.