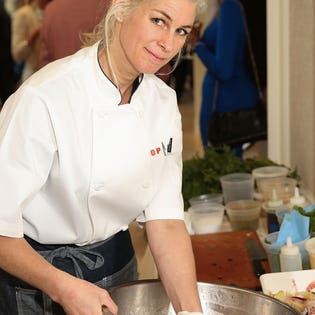 If you’ve ever wished you could sample some of the mostly mouth-watering meals pressed together by contestants on those high-pressure cooking competition TV shows, you’ll get your chance to do so when Top Chef’s first permanent quick-service cafe opens, in Philadelphia, January 23rd. The brainchild of Philly-based Spectra hospitality, venue-management and corporate partnerships company in collaboration with Bravo Media, Top Chef Quickfire will make the newest culinary addition to the Comcast Corporation headquarters’ public dining concourse in Center City. Though the hit show’s rotating roster of celebrity chefs won’t work behind the line, interpretations of their recipes will feature daily on a frequently changing menu.

“I’m really excited to see the guests’ reaction to it,” says Spectra VP of Culinary Excellence Scott Swiger, who came up with the idea. “Taking what happens on the show and being able to experience it, from a customer standpoint that’s a really cool thing to do.”

The name “Quickfire” comes from the series’ Quickfire Challenge contest, in which competitors have a limited amount of time to make a dish or complete a task according to instructions. The winner either receives a prize or immunity from later elimination, while sometimes the loser gets immediately booted off the show.

Presumably that won’t happen in the real-life Quickfire, where customers can – without trial or judgment — pick up premade hot and cold salads, soups, sandwiches and small plates or order any of 13 freshly cooked entrees from a cashier or by using one of four cashless digital kiosks – the first to come to the Comcast Center highrise. Meantime, after high-level consultation with season 16 Top Chef contestant and Philadelphian Eddie Konrad, executive chef Matt Stone will oversee a staff of two-to-four cooks who receive intense training on the ins and outs of the dishes, all prepared from scratch. (Stone says cashiers will also sample and speak intelligently of the food.)

“There are tribulations in taking these recipes from the chefs and translating them: reducing the size, combining some cooking steps ahead of time,” says Stone in early January after one of many full days spent onboarding staff. “A lot of these came from Quickfire challenges. They’re designed to be fast (for lunchtime crowds), sometimes even two minutes to create something because we’re looking for five-minute ticket times and quick service.”

Despite the fast pace, Quickfire’s repertoire features gourmet ingredients. With an Emmy and a James Beard Foundation award to their credit, the representatives from Bravo who taste-tested the opening menu at least four times to ensure the Quickfire experience stays true to brand would have it no other way. To wit, Rick Bayless’ season one queso fundido burger consists of chorizo-spiced short rib patties, pepper jack cheese, poblano peppers, onion and chipotle-lime crema on a brioche bun. Season 11 winner and Philadelphian Nick Elmi’s fried shrimp po’boy gets the Philly treatment with a beloved Amoroso roll (don’t eat a cheesesteak without it), sriracha remoulade, shaved fennel and crispy pancetta.

“The flavors are worldly because these dishes are coming from top chefs around the world,” says Stone, who worked as executive chef at The Capital Grille steakhouse chain earlier in his career.

The dishes themselves won’t usually be exact replicas of what you see on TV. They don’t always translate well to a real kitchen that aims to do 400 covers per day in a miniscule 1300 sq. ft. space, and, as Swiger notes, “Nobody (on the show) is ever writing anything down. They’re just cooking to taste.”

As he thinks up ways to bring patrons into Quickfire outside of busy lunch hours, Swiger anticipates that Top Chef veterans will sometimes cook their own dishes during pop-ups, appearances, book signings and the like. Though they may come from far and wide, Kevin Spraga joins Elmi as a Top Chef winner from Philly. Fan darling and city native Jennifer Carroll will reprise her role as a contestant on the upcoming all-star season that starts March 19.

Guests who rent the space for private parties or choose to sit in the 14 chairs instead of taking their meals to the concourse’s common seating area or elsewhere will get to enjoy watching their favorite contestants during streaming replays of episodes, as well as other Bravo content. Patrons can also buy branded Top Chef merch in what Swiger believes is the only brick-and-mortar retail outlet in the world to sell it.

Cross-promotional opportunities and synergies like these are plentiful – and complicated — in the relationship between Spectra, Bravo and Comcast. Not only do both Comcast and Spectra make their home in Philadelphia, Spectra is majority owned and controlled by a private equity firm in which Comcast-owned Comcast Spectacor is an investor. Further, Bravo is a program service of NBC Universal Cable Entertainment, a division of Comcast-owned NBC Universal. The first iteration of Quickfire took form as a concession area that lasted through the 2018 and 2019 Major League Soccer seasons at Chicago’s SeatGeek Stadium, which Spectra manages. The outlet won’t return because the Chicago Fire team is relocating.

Spectra doesn’t expect any such upheaval at the Comcast Center. Not only does the modern office tower co-anchor the communication company’s urban corporate campus, but the site, with its robust concourse boasting cherished local food boutiques, a 360-degree domed theater designed by Stephen Spielberg, and Holiday Spectacular show shown on a dazzling LED continuous-video wall, lures hundreds of thousands of residents and tourists annually.

However, such white-collar amenities don’t come cheap. While he wasn’t able to disclose the amount invested in the store, Swiger does say the company spent a lot to buy a wide variety of top-level kitchen equipment and concedes his price point will ring up higher than his friendly competitors on the concourse.

Plus, he says, “We thought about a lot of little details to make the place special.”

Assuming all goes well, Swiger hopes to copy the concept elsewhere, though he declines to speculate where or when.

THE REAL NEW ORLEANS MARDI GRAS!!!
All you need to know about Off-season Travel (TRAVELSTART)
Why We Love Nashville – Travel Channel
Mykonos Vacation Travel Guide | Expedia
Where to find the best-value winter sun