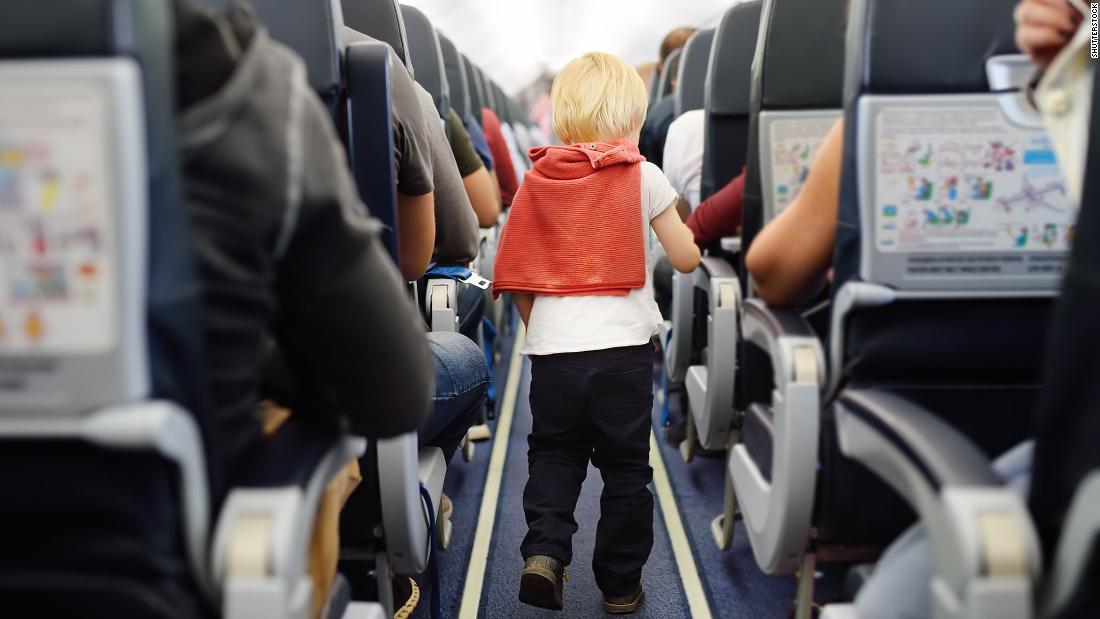 (CNN) — Basic economy is fine if you’re a solo airline passenger willing to roll the dice on a middle seat. For families, the lowest airfare class can be problematic.

Without seat assignments — which increasingly come with a fee attached — children may end up separated from their parents.

Thursday, the non-profit research, media and advocacy organization posted an online petition “demanding airlines put safety over profits.”
“Children 13 or under should sit with their families while flying, and should not be charged extra fees to do so,” the petition reads. USA Today first reported on the petition.

By late Monday afternoon, the petition was approaching 50,000 signatures.

“Children need a responsible adult around and whether it’s just so they can go to the bathroom in the middle of the flight or if there’s an emergency, it’s not safe to have a child without somebody there to take care of them,” said Anna Laitin, director of financial policy for Consumer Reports’ advocacy arm.

“And no business traveler or solo traveler wants to be put in charge of a 3-year-old they don’t know, and no parent wants to be seated, strapped in unable to move, that far from their child,” she said.

If there’s an emergency evacuation and a child is seated 10 rows behind their parent, “no one believes that parent is going to calmly move forward and get off the plane” without their child, Laitin said.

In 2016, the family seating issue aboard airlines was addressed in a Federal Aviation Administration bill passed by Congress that called upon airlines to look at seating children 13 and younger next to an accompanying family member at no additional cost.

The bill left some wiggle room, calling for such a policy “if appropriate.”

Laitin says a couple of years went by with no word from the Department of Transportation on the issue.

So in September 2018, Consumer Reports filed a Freedom of Information Act request to find out what action had been taken.

About a year later, the DOT responded with information it had gathered from airlines and enclosed 136 complaints it had collected from consumers over a period of about two and a half years.

“While that’s not enormous in numbers compared to what they get on other things, (the complaints) were very striking,” Laitin said. “We’re talking about 1- and 2-year-olds, we’re talking about children with autism, families just having an enormous amount of problems getting seated with their children.”

The airlines offer basic economy fares that don’t include seat assignments. The airlines have pop-up alerts around those fares to ensure that passengers are aware of those restrictions.

In the summer of 2019, modifications were made to its seating engine “to ensure that whenever possible that we assign children to a seat adjacent to an adult traveling on the same PNR, which is the passenger name record,” Hobart said.

“We’ve essentially rolled out automatically seating families together. So we automatically scan for families who do not have seats assigned next to each other and we work to seat them together,” Hobart said.

In cases where seats are not already assigned, the airline can make adjustments at the gate or on board the aircraft, he said.

“It’s in our interest to have families sit next to each other, and it’s clearly something that families care about. And we want to ensure that when they do travel with us they have a safe, friendly, enjoyable experience and this is one of ways that we can help make that happen,” Hobart said.

Delta Air Lines encourages customers with seating questions to contact the airline “as soon as possible to allow for the opportunity to address their concerns.”

“Regardless of the type of ticket purchased, Delta works with customers on a case-by-case basis to ensure their travel needs are met,” the airline said in a statement.

American Airlines has been developing a process to ensure children younger than 15 are seated with an adult family member, the airline said in a statement.

“For families traveling with a child under the age of 15 who don’t have a seat assignment, our system will work to seat the child with an adult in the reservation starting 48 hours after the reservation is ticketed. This ensures the child will not be assigned a seat alone,” the statement said.

Staff at the airport are also able to move some passengers around to accomodate families that might have late bookings or rebookings, American said.

Top 10 Things to Do in Scotland
Coronavirus: Angry MPs lambast foreign secretary over stranded Brits
Malta is a perfect winter escape! | traveling during off-season
Great Wall of China’s Badaling section reopens to visitors
Lawmakers closing in on deal for $25 billion in cash coronavirus aid for airlines