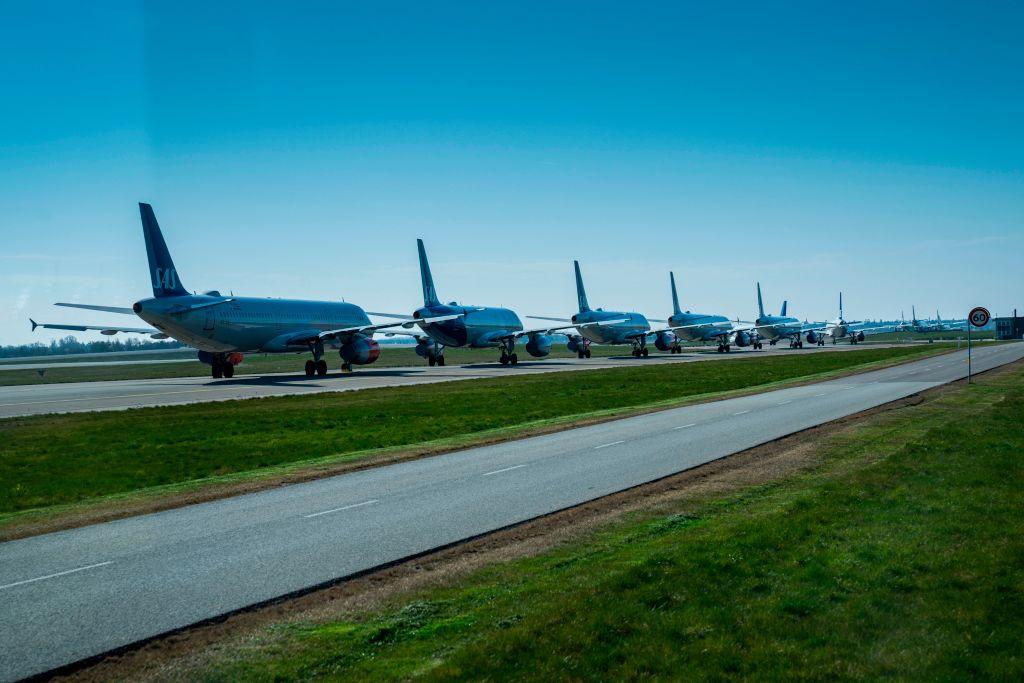 The coronavirus pandemic has triggered large-scale lockdowns around the world as infection rates have soared.

With borders closing at short notice, tens of thousands of Britons have been left stranded abroad with few options when it comes to getting home as flights dwindle.

It’s made harder by countries and regions that are barring transit passengers from entering.

Fortunately, a number of repatriation flights are now available for those who are stranded. There are also new details of getting alerts for any flights that may be arranged in the coming days.

The airports of Bratislava, Kosice and Poprad have stopped regular scheduled passenger flights.

A commercial charter company, Charter Advisory, is offering tickets on flights out of Slovakia to UK nationals. The FCO advises: “Please note these are NOT UK government organised flights, and all arrangements are between passengers and the company concerned. Please note the conditions of carriage carefully.

“It is the operator which decides who boards and who is eligible. Anyone travelling must have appropriate and valid identity documents for the UK. We understand that seats on the flights are offered on a first come, first served basis.”

Upcoming flights can be found on the comany’s Facebook page, in Czech only.

With the exception of some land crossings, Latvia has closed all of its borders.

There are currently limited “exceptional commercial flights” from Riga to London Gatwick scheduled for 25, 26 and 27 March. British nationals have been advised to check the Air Baltic website for details.

Direct flights between the UK and Greece have been suspended until 15 April. However, you can still find indirect flights home.

The FCO advises contacting the British Embassy in Athens if you need additional help.

LOT Polish Airlines are operating a limited number of flights from Warsaw Chopin Airport to the UK.

UK nationals who want to book seats on these flights are advised to fill in their details on a dedicated form. The airline will then contact you directly to confirm the booking and take payment.

Flights in and out of Ukraine are suspended for two weeks from 17 March.

The FCO says that there may be a small number of repatriation flights available, and UK nationals should contact the airlines directly.

The UAE stopped all flights as of midnight 24 March.

There are no repatriation flights at present, but the FCO has advised UK nationals to contact their airlines so “any demand is logged”.

Those who are stranded in the Emirates and are in difficulty should contact the British Embassy on uaeconsular.escalations@fco.gov.uk. You should include your full name, passport number, visa status (resident or tourist), contact details and your particular circumstances.

On 16 March, Jordan closed all of its borders, both land and sea.

The UK government is currently working out the possibility of a commercial flight out of Jordan, to Doha, with Qatar Airways. From there, you will need to book separate tickets to the UK. The FCO said this will be in the range of 1,599 JOD (£1,900).

The FCO said: “In line with the FCO Travel Advice of 23 March, British nationals who have travelled to Jordan and who now find themselves without travel options to return home are the priority for places on this flight.

“If you are in this category and interested in purchasing a ticket on this flight, please send a copy of your passport biodata and visa stamp pages to Cons.Amman@fco.gov.uk by 8am on 25 March. The Embassy will then reply on 25 March with further details. You cannot purchase tickets for this flight through other means.”

Flights in and out of Kuwait have been suspended since 13 March.

There may be flights to London with Kuwait Airways from 26 March, and the FCO has advised British nationals hoping to leave to contact the airline’s call centre on 171 or or send the passenger name and nationality via WhatsApp to 00965 22200171.

Uzbekistan has suspended all flights in and out of the country. However, the Uzbek Government has organised two flights from Tashkent to Munich, which are due to depart during the week commencing 23 March.

The FCO has not released the details of the flights but British nationals hoping to get a seat on the flight are advised to contact Uzbekistan Airways by email on pvo@uzairways.com.

While the FCO has advised British nationals in India to be prepared to wait until commercial flights are available, it has said those who want to leave should get in touch with their details.

It said: “If you are a British national who is currently visiting India and you wish to return urgently to the UK, please email Conqry.Newdelhi@fco.gov.uk. Please include your full name (and the names of any family members with you), date/s of birth for all named family members), your passport number, visa status and contact details, including your exact location in India.

“Please confirm your date of arrival in India and details of the return flight that you had planned to take back to the UK. Please also inform us if you have any special circumstances such as a medical condition we may need to be aware of.”

All international flights to Pakistan have been suspended until 4 April, which would also impact outgoing flights.

However, despite the ban, Qatar Airways is planning to operate daily flights from the country between 25 March and 3 April, according to the FCO.  Pakistan International Airlines (PIA) will also have flights to the UK on 27 and 28 March. These are only being sold through travel agents, according to the FCO.

Other airlines may also be planning one-off flights out of the country in the coming days.

All international flights to and from Nepal have been suspended until 31 March.

British nationals who are stranded in the country have been told to email BEKathmandu.Details@fco.gov.uk with their name, passport number, email address and phone number. The UK government is working on possible flights out of the country and will be in touch if they are successful.

The Government of Mongolia is planning charter flights out of the country at the moment. The FCO has advised that those wishing to leave the country should email consular.mongolia@fco.gov.uk with your contact details and a photo of the ID page of your passport.

International flights in and out of New Zealand are being suspended after the country declared a Level 4 (its highest) alert over coronavirus.

UK nationals have been advised to contact their airline, travel provider, and insurance company for the latest information. The British High Commission has also released a contact form where you can leave your details to be contacted regarding any upcoming flights as well as details of the lockdown in the country.

Fiji has suspended all scheduled flights from Nadi Airport as of 26 March. From 29 March, all passenger travel to the outer islands is suspended.

For UK nationals who might be stranded, the British Embassy in Fiji will be posting updates about what to do next on their Twitter and Facebook pages.

There are now no direct flights between Argentina and the UK, although you can still get home via another country. However, international flights are only departing from Buenos Aires at the moment.

Aerolíneas Argentinas is operating some domestic flights from tourist areas to the Argentine capital. You can also drive, get a taxi or use public transport.

However, as well as your passport and proof of a booked flight, the FCO advises you carry a copy of the letter issued by the Ministry of Tourism confirming that foreign nationals are exempt from the quarantine if they are travelling to return to their country of origin and a letter issued from the British Embassy confirming that you should be allowed to travel. If you are met with any resistance while trying to access the airport, you should contact the British Embassy on +54 11 4808-2200.

The FCO is also advising those wishing to leave to contact them via email on returnfrom.argentina@fco.gov.uk, with full name(s), passport details, date(s) of birth, exact current location in Argentina and contact details.

The UK government is currently working on securing flights home for those who are stranded. British nationals who want to leave should contact help@fco.gov.uk with their full name, location and best form of contact (ideally email address).

Commercial airlines have ceased operating from Panama until 22 April. Some exceptional flights may become available and the FCO has advised British nationals to contact airlines directly.

There are currently flights in and out of Costa Rica but cancellations and disruption is likely.

British Airways have indicated that their direct flights to and from Costa Rica will cease after their last flight on Monday 30 March 2020 and are scheduled to resume on 27 June 2020, the FCO said.

Commercial flights to the UK from VC Bird International Airport will be temporarily suspended from 29 March.

The Dominican Republic has suspended all international flights. There are some limited “ferry flights” to repatriate foreign nationals.

The last direct flight to the UK from the Caribbean island has already departed but the FCO advises that Britons can transit via the US or Canada to get home, provided they meet all the criteria.

All flights in and out of Egypt are currently suspended.

Any possible repatriation flights will be shared on the British Embassy in Cairo’s Twitter and Facebook accounts.

South Africa is closing its air space from 26 March until at least 16 April.

The FCO has advised those affected to contact their airlines first.

There are now no commercial flights out of Cape Verde but European repatriation flights may be available.

Kenya is suspending all international flights from 11.59pm local time on 25 March.

British Airways is operating a small number of additional flights from Nairobi to the UK, which are bookable via the BA website.

The alternative is a Kenya Airways flight to Amsterdam, available for EU and British nationals, at 10pm local time on 25 March. Contact Kenya Airways on +254 741 131 526 or contactcenterbackoffice@kenya-airways.com for bookings. You will then need to book separate transport home to the UK from Amsterdam.

There are currently no commercial flights in or out of Namibia. Any British nationals should register their presence in the country with the British High Commision on general.windhoek@fco.gov.uk.​

The flight ban in Senegal has been in place since 20 March.

For UK nationals wishing to leave, the FCO has said any outbound flights will be posted to the British Embassy in Dakar’s Twitter and Facebook pages.

National parks could be this summer’s go-to vacation spots
Dream trips to forgotten corners of Italy
EasyJet to cut workforce by 30% as coronavirus pandemic weighs
Royal Caribbean hopes to resume cruises as soon as August, but the CEO says only if it’s safe
Coronavirus: Airline passengers trying to switch seats will be told to stay put